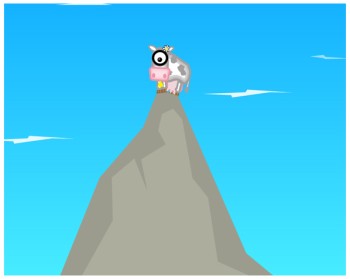 Frozenbyte has tossed some "milestone bonuses" into the Humble Frozenbyte Bundle, offering gamers who pick up the pack even more coolness for their money.

The Humble Frozenbyte Bundle was a pretty sweet deal when it was first announced: Shadowgrounds, Shadowgrounds Survivor and Trine, all excellent games in their own right, plus a couple of unreleased "work in progress" titles, Splot and Jack Claw, all for whatever price you want to pay and which can even be directed toward a charitable donation. I own all three of Frozenbyte's released titles and let me assure you, that's a hell of a bargain. But now it's even better.

"The long awaited Humble Frozenbyte Bundle bonuses are here and on the top of the list is of course a cow, Daisy, from Splot," Frozenbyte revealed on its blog. "What this means is that all of the people who have bought the bundle can now access a playable sneak preview of Splot from their bundle downloads sites. This is still a work in progress and it is missing some cool combo features, but it should give a pretty good perception of what the game is going to be like."

And there's more! Frozenbyte has also released the source code for both Shadowgrounds and Shadowgrounds Survivor to Bundle buyers and, finally, the long-awaited level editor for Trine, which in itself is a pretty big deal.

The Humble Frozenbyte Bundle, the third in the Humble Bundle series, is humming along quite nicely, ringing up more than $727,000 on roughly 146,500 unit sales with a little over four days remaining. Linux users are far and away the most generous, paying an average of $11.73 per purchase, while Mac gamers are forking over a respectable average of $6.31. Team Windows, on the other hand, is embarrassing itself, accounting for more than half of the total sales figure but an average purchase price of just $3.96. Terrible, guys. Just terrible.