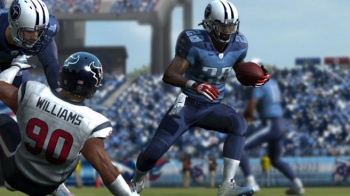 To get the most out of upcoming EA Sports titles, you might have to fork over an annual fee.

EA's online pass system that requires used buyers to purchase a $10 code to play online might not be not be the only way the company plans to generate side revenue from EA Sports titles. EA might also be looking into offering an annual subscription plan that will provide extra features for those that sign up.

EA had been talking about a persistent ID program that would recognize players through multiple games and multiple years, but it wasn't mentioned as a pay service. PastaPadre claims to have received a document that explains an "EA Sports Subscription Service" that would include this feature, while a survey gives us further details.

The document says that a subscription would provide benefits across all EA Sports titles, from Madden to SSX. Subscribers would get discounts on DLC, exclusive DLC, access to full downloadable versions of certain games before release, a "free opportunity" to extend the play experience to the PC and web, and the ability to transfer content from older titles to newer titles.

For example, subscribers would be able to download Madden 12 somewhere around 7 days before release, and purchase it in stores to keep playing. They'd also be able to bring courses downloaded in Tiger Woods 12 into Tiger Woods 13. Information from a survey apparently reveals that EA is looking at multiple tiers with different levels of service that range from $14.99 to $34.99 per year. Those that pay a higher rate get better features.

I've got no problem with companies such as EA offering loyalty bonuses to their fans, but this subscription plan seems to prove how the overuse of DLC is a slippery slope. Subscribers could eventually be given exclusive access to content that certain fans would consider crucial. For example, what if we someday have to pay to bring our data from a games like Mass Effect 2 to Mass Effect 3? EA has to be mighty careful about how it handles implementing a service like this, if it's not just a rumor. Keep in mind that EA may have just been reaching out to judge the public's reaction to such a plan.