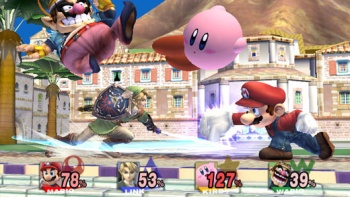 There's a new console coming from Nintendo, but it will be six weeks before we find out any definite details about it.

After a great deal of rumor and speculation, Nintendo made its new console all nice and official alongside its most recent earnings report. Nintendo isn't exactly being forthcoming with details, but it has confirmed that the console will come out in 2012, and that it will be playable at E3 this year.

The first rumblings about the new machine occurred earlier this month, from a number of anonymous sources. According to the rumors, the console is "significantly" more powerful than the Xbox 360 or PS3, is capable of HD graphics, and is backwards compatible with the Wii. The sources also said that Nintendo was trying to appeal to the Western market with the Wii's successor, and was showing it to publishers now to make sure that there were plenty of games ready for it when in launches in 2012.

Other rumors suggest that "Project Cafe," as the console is supposedly known as inside Nintendo, will have regular controllers as well as a Wii-mote style motion controller, which will have large touch screens built into them. These screens will also apparently allow for private splitscreen multiplayer, although this seems rather complicated and quite unlikely. It will apparently cost $400 on release, but whether this is true or not remains to be seen.

It's not hard to believe that Nintendo is aiming to surpass Microsoft and Sony's current platforms with its new console, especially if it's hoping to appeal to a more hardcore gamer audience. That said, the Wii was something of a curveball, and there's nothing to stop Nintendo trying something equally unusual with its successor. Either way, it's only about six weeks until E3, so we don't have long to wait to find out.