The North American box art for Catherine will be censored, but only at certain outlets.

When we first saw the box art for Atlus' enigmatic erotic-horror-puzzle-platformer Catherine, it left no doubt that this was a game about sexuality, and probably more than a little bit of fanservice to go along with it. On Xbox 360, protagonist Vincent clung to the shapely rear of his girlfriend Katherine; on PS3 he slid down into the ample cleavage of the coquettish Catherine.

While Atlus used the unchanged box art to announce that the game would be localized after all, sharp-eyed consumers noticed that online rental service Gamefly and Amazon.com were now using different art in their promotional images. These images were much less risqué than the originals, cropping out the T&A in favor for close ups of the respective ladies' faces. 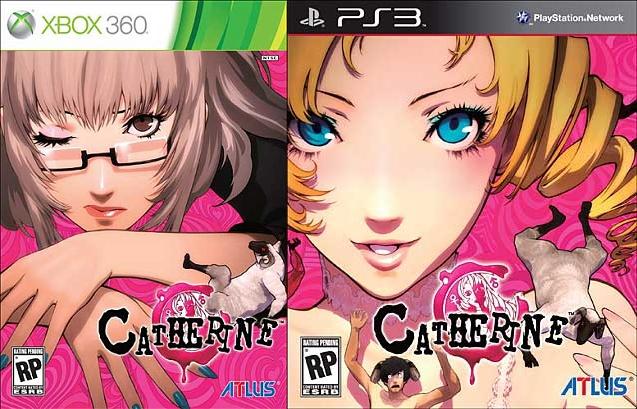 Naturally, this led to speculation that the Catherine box art would be censored for its North American release. However, Atlus told Siliconera that the alternate box art was just that - an alternate. According to Atlus, this art was a separate package that was to be sent to certain retailers who wanted a more family-friendly image.

The vast majority of copies available at launch will feature the cover we originally unveiled, essentially the Japanese cover of the game. A small percentage of copies, however, will feature a cover that is more considerate of certain retailers' broader customer demographic. Fans need not worry; Catherine's cover art is NOT being altered for North America. There is just an extra option being made available for more sensitive shoppers.

My first inclination is to say "Aha, Wal-Mart!" But assuming Atlus is telling the truth (and there is no reason I can think of for it to lie), then changing the cover for resale at Wal-Mart - North America's biggest videogame retailer - would hardly be "a small percentage of copies." Still, one can't help but wonder just what sort of outlet would request such a box art change if not the store that sells everything.

For amusement's sake, here's what a certain dashingly handsome news writer wrote in the original Catherine post: "It's almost a sure bet that if Catherine. does make it over to the States we won't get box art that's anywhere near as interesting as this." I'm sure he's glad to be proven wrong - mostly.

Op-Ed: A Response to A Bit of the Old Up, Up, Down, Down Chris Pranger 17 Comments