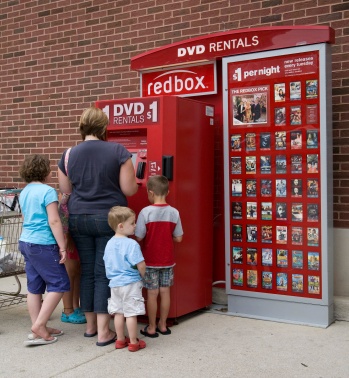 Red Box, the movie rental machine stationed outside U.S. supermarkets and convenience stores, will continue to expand its stake in the videogame rental market with 21,000 new machines in June.

Red Box, the overnight movie rental kiosk (DVDXpress is its European equivalent), tested game rentals, two years ago. The company decided that it was a success, opening 5,000 game rental stations across the U.S. last October.

In a recent press release, Red Box President Mitch Lowe said it has rented more than a million games (priced at $2 a night) since starting the experiment in August 2009.

With a focus on family releases, Red Box caters to parents in need of a distraction to throw at their kids for a night rather than offer an alternative for gamers who are too poor to buy a game and too impatient to wait on Gamefly. Maybe a dedicated gamer can beat Portal 2 in a day, but L.A. Noire?

Then there are the general issues that come with Red Box machines. Such as questionable stains on kiosks, old ladies who mistake it for a Coinstar machine, indecisive couples who hold up the line and kids who think they are the chosen one who can reach into the slot and pull out a title.

As a gamer who grew up with Blockbuster (who currently charge $8.99 a game) and has been a subscriber to Gamefly for the past year ($15.95 for unlimited time with one game), I'm not sure what Red Box has to offer me.

Let us know how your Red Box game rental experience has been. Were you able to get past the greasy LCD screen, dripping moisture from the last guy's sweaty palm? Could you read title's names between the powdered sugar and Dorito dust stuck to the screen?