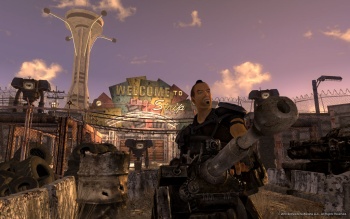 Bethesda doesn't want you to download the latest update for New Vegas until it's put out a fix for it.

Hot on the heels of the news that Obsidian's patch for Fallout: New Vegas has made the game unplayable for just about everyone, Bethesda has officially stated that it's working on fixing things. Oh, and it's also telling users to decline accepting the update.

According to a post on the bethesda blog, the game's developers have found what's causing the problem and will be putting out a new patch soon:

"Regarding the Xbox 360 update, we've discovered a solution to the issue that's causing problems with game saves," it read. "We'll be hosting a replacement update on Xbox Live as soon as humanly possible.

"If you haven't grabbed the New Vegas update on 360 today, we recommend you decline the update until the new one is live. We'll be sure to let you know when it's up."

Fallout: New Vegas has earned a reputation for being enjoyable, but broken. The fact that an update designed to fix the game wreaked this much havoc is pretty ironic. To quote John Funk: "On some level I can't help but find it funny in its absurdity at this point. Even when Obsidian tries to fix the game, it breaks it."