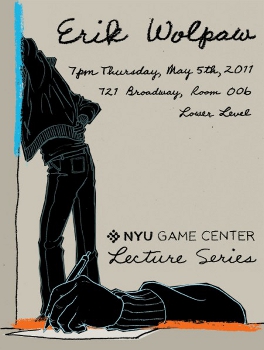 Erik Wolpaw may reveal some insight into the creation of games such as Portal 2 at an upcoming NYU lecture.

Hardcore Valve fans have already been trying to learn Valve writer Erik Wolpaw's daily routine for years in an attempt to "accidentally" run into him at a nearby coffee shop or grocery store. I have good news: you can come out of those bushes and just head to New York University. Wolpaw will be part of an upcoming session of NYU's Game Center lecture series.

On Thursday, May 5, 2011 at 7PM, Wolpaw will make his way over to 721 Broadway, Room 006 in New York City and words will come out of his mouth that anyone listening will be able to hear. Specifically, he'll begin the session with a guided playthrough of the recently released Portal 2, followed by being yelled at for not posting a "Spoiler Warning" sign outside the door, followed by an interview and general discussion.

The audience is encouraged to join in and may bring questions on any subject that may relate to Wolpaw's work on videogame website OldManMurray.com, his writing for the Portal series, or just videogames in general. I personally have serious questions to ask about snacks and butter, but I may not be able to make it.

The event is open to both NYU students and the public, so you may want to try to RSVP here yesterday. NYU says that popular demand is already making it consider a move to a larger venue. It's going to be a packed house.