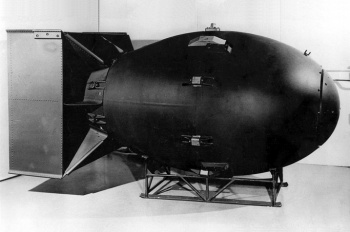 In the future, hard drive capacity could be seriously expanded through the use of uranium.

Steve Liddle of the University of Nottingham has developed a single-molecule uranium compound that could someday lead to super-high capacity hard drives. The basic premise of the compound's potential is the smaller the magnet, the bigger the hard drive.

Hard drives currently use magnetism to do their magic. Liddle's compound is made of two uranium atoms that maintain their magnetism at a low temperature. Using this compound in a hard drive could lead to a hundred or thousand-fold increase in storage capacity while still keeping the storage device small.

It's apparently an advance in the field of single-molecule magnets and with further research could lead to general applications. Liddle explains: "At this stage it is too early to say where this research might lead, but single-molecule magnets have been the subject of intense study because of their potential applications to make a step change in data storage capacity and realize high-performance computing techniques such as quantum information processing and spintronics."

While it might sound weird to have uranium inside of your computer, the research is using depleted uranium, a by-product of uranium enrichment. It primarily points to a technique that can be researched using similar metals, according to Liddle. Your home office would be safe from a nuclear explosion, probably.