Sony has apologized for the PlayStation Network attack and gave more details on the incident at a press conference.

Sony bigwig Kaz Hirai recently held a press conference in Japan where he revealed specifics on how the major PlayStation Network attack took place and talked about the steps Sony is taking to fix the issue. In addition, he offered up a sincere apology.

"We would like to extend our apologies [to PlayStation Network and Qriocity users] ... because we potentially compromised their customer data," Hirai stated. "We offer our sincerest apologies."

Unless someone is buying an RV in my name right now, I can accept his apology. Sony executives then explained some of the details behind the attack. The intruder hit a server run by Sony at AT&T's service center in San Diego, California, which Sony realized sometime between April 17 and 19. The PSN was shut down on April 20 as Sony contacted a security firm to help investigate.

The executives called it a "highly sophisticated attack by a skilled intruder" that "took steps to cover his tracks." On April 24, two more security firms were contacted as Sony realized the seriousness of the attack. Customers were notified around April 26 that their information may have been stolen, even though there was no proof, because the possibility couldn't be ruled out. Approximately 10 million credit cards were attached to the PlayStation Network, but Sony still hasn't confirmed that any credit card data was taken.

*Update*: Here's an image that Sony released (via Mark MacDonald on Twitter) that gives a visual description of how the attack took place: 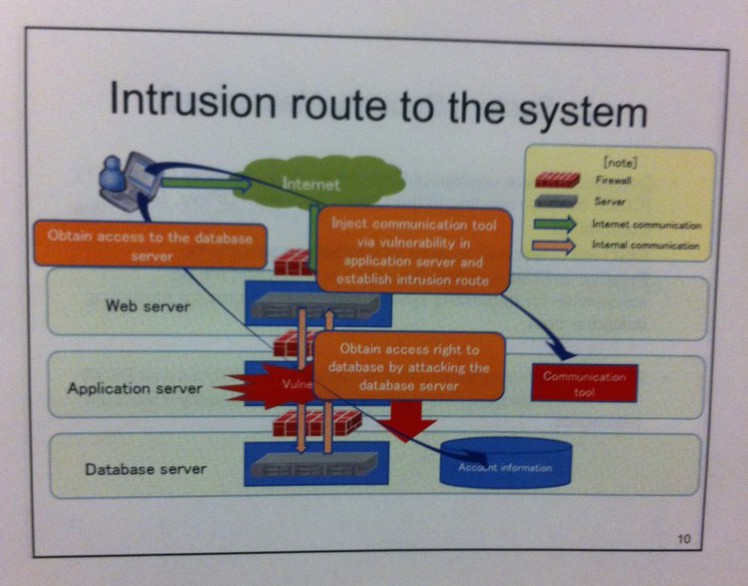 Sony is now moving its data center to a new, secret location, hopefully deep within the core of the Earth. Sony detailed other increased security measures, Sony-provided assistance for credit monitoring, and "welcome back" customer appreciation bonuses in a press release. Hirai surprisingly also talked Sony's encounter with Anonymous, referring to how the faceless hacking group published personal information of Sony executives, but says the group may not be related to the PSN intrusion.

Hirai concluded the press conference by stating: "These kind of attacks... may not be limited only to Sony." Sony is cooperating with law enforcement agencies such as the U.S. Department of Homeland Security and the FBI for the "safety of a networked society." Right on.