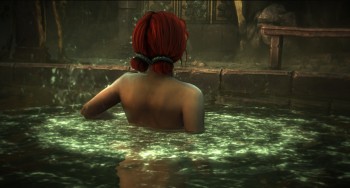 The Australian version of The Witcher 2 will have a couple of "small changes" made in order to squeeze it into the country's MA15+ videogame rating.

Age ratings for The Witcher 2: Assassins of Kings are out and it will come as no surprise at all to anyone familiar with the original game that it's "mature" across the board: M (Mature 17+) in North America, 16+ in Germany and 18 in the U.K. and the rest of Europe. In Australia, however, it's rated MA15+, which is the country's highest rating but not quite high enough to get it out unscathed.

"In order to obtain the rating in Australia, CD Projekt RED was unexpectedly obliged to make small changes to game content relating to the topic of sex as a reward," the studio revealed in an email. "Since these changes are quite minor, especially relative to the total amount of content, they are unlikely to significantly affect the overall play experience."

And to be fair, the changes actually do appear to be very small. The quests are still in the game, but Australian Geralt will have to choose a more tangible payoff for completing them. Witcher 2 Project Lead Adam Badowski said the studio was "disappointed" about having to make the cuts but that removing sex as a quest payoff was the only way to get the game onto the Australian market.

Sadly, we can't point and laugh too loudly at Australian censorship this time around. The North American version of the original Witcher was censored too, coming to market without the infamous "boob cards" that commemorated Geralt's conquests.