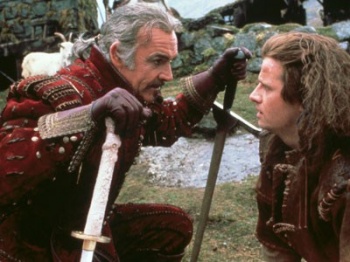 The director says that it's not a question of if movie will get made, but rather when.

Justin Lin, the director of Fast & Furious 5, as well as the upcoming fifth Terminator movie, says that yet another project his attached to - the Highlander reboot - hasn't been shelved despite Lin's incredibly crowded schedule.

Lin said that he'd been working with Art Marcum and Matt Holloway, two of the writers behind Iron Man. He said that the project was in good shape, and that he intended to continue working on it when he had finished publicizing Fast 5.

He admitted, however, that it might be a while before actual filming started on the project. "You work on so many projects all at once," he said. "And at some point, you have to make the call. I feel like right now, I still have to see all the other things come together for us to go make it."

Also supposedly involved in the project is Melissa Rosenberg, and Emmy winning screenwriter who also penned the Twilight movies. Rosenberg was supposedly working on a script, but Lin seems to suggest that the project isn't at that stage yet. Other comments, this time made by the film's producer, Neal Moritz, suggest that it's an origin story, and won't come out until next year at the earliest. And with Lin working on so many other projects, even 2012 seems optimistic.