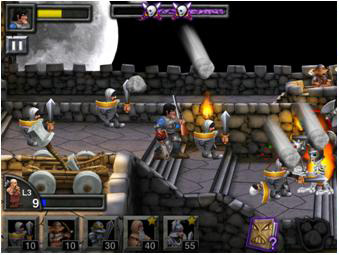 Army of Darkness: Defense, a "mobile castle defense game" based on the geek-favorite 1992 Bruce Campbell film, is coming to Apple's portable devices on May 12.

Created by prolific iOS developer Backflip Studios, the game focuses on the film's climactic castle siege set piece. Players control Ash, and likely through the majesty of his incredible chin, summon "swordsman, armored knights [and] archers" to aid in the defense of the Necronomicon from the attacking Deadite hordes. The press release also promises appearances by the film's key characters (read: Evil Ash), regardless of whether their presence actually makes any sense in the context of the above scene.

Army of Darkness: Defense hits Apple's App Store on May 12. The iPhone/iPod Touch version carries a 99 cent price tag, while the iPad iteration of the game retails for $2.99.

Got all that? Good. Now comes the part where I burst everyone's bubble with the backhanded slap of reality.

While my geek-senses are tingling at this announcement just as hard as any of yours, the reality is that no game based on the Evil Dead films has ever been good. In all truth, the best ones only barely qualify as average, and the majority fall squarely into the "so terrible they might actually cause physical pain" camp.

It's not that I don't want a good Bruce Campbell game -- nothing lends itself better to the world of gaming than Bruce's chainsaw arm -- but after suffering through the previous Evil Dead-branded cash ins, I'm just too jaded to muster any kind of enthusiasm.