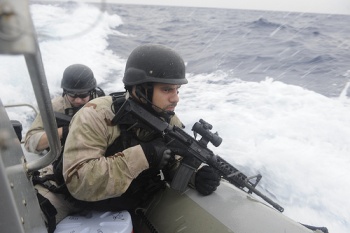 Help defeat pirates and play videogames at the same time? Sounds like a dream come true.

The US Navy's Office of Naval Research has unveiled a new idea for putting together strategies for dealing with Somalian pirates: crowdsourcing via a thousand person strong MMO. The game, called "Massive Multiplayer Online WarGame Leveraging the Internet, or "MMOWGLI," is the result of years of research into possible solutions to the piracy problem.

MMOWGLI, which launches on May 16th, will feature two factions. On the one side you have a multi-national, anti-piracy task force, and on the other you have the pirates themselves. Task Force players will have to consider a number of different factors, like the logistics of protecting and arming ships, the likehood of pirate attacks, and how to handle the various financial, jurisdictional and temporal difficulties involved in anti-pirate action.

The pirates' job is a little more simple, as their role is, well, to be pirates, attacking ships and taking hostages. This will put the Task Force's preventative plans to the test, and give them the opportunity to see what did and didn't work. Task Force players will also be able to stage rescues and raids, as well as provide humanitarian aid to the people of Somalia.

The thinking behind MMOWGLI is that it might produce unorthodox but effective strategies that wouldn't ordinarily arise from traditional wargames. "We hope MMOWGLI will help us to understand what happens when your insights are combined with the observations and actions of another player," said Dr. Larry Schutte, the ONR's director of innovation. "Will that fusion result in a game-changing idea or solution, or will the MMOWGLI platform teach us something about our traditional thought processes?"

If you're interested, you can register for MMOWGLI here, although it sounds like places will be rather limited.