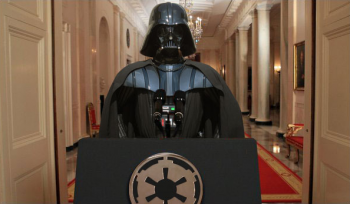 This is a major victory against the Rebel Alliance, but the Dark Lord of the Sith won't release photos of the body ...

The news of Osama Bin Laden's death has been met with wide variety of reactions, including parodies and videogame send-ups. However, a new satire on the Web shows how the news would've been broken if it had been Darth Vader addressing the death of another dangerous terrorist: Obi-Wan Kenobi.

A fake version of the New York Times website -dubbed the "Galactic Empire Times"- is running a front-page story (accompanied by the picture of Vader at a pulpit) that talks about how Galactic Empire forces were able to kill its number one enemy. According to the story:

"For over two decades, Kenobi has been the Jedi rebellion's leader and symbol," the Lord of the Sith said in a statement broadcast across the galaxy via HoloNet. "The death of Kenobi marks the most significant achievement to date in our empire's effort to defeat the rebel alliance. But his death does not mark the end of our effort. There's no doubt that the rebellion will continue to pursue attacks against us. We must and we will remain vigilant at home and abroad."

The story also features various multi-media tie-ins (which link to a Star Wars wiki site), as well as a link to the original story shown on the New York Times official site.

The site is a pretty clever piece of satire, apparently created by Robert Scott in New York. Hopefully he'll do a follow-up piece where Vader addresses conspiracy theories about the news; you know, the ones where people say the story was made up to distract from his fake birth certificate.