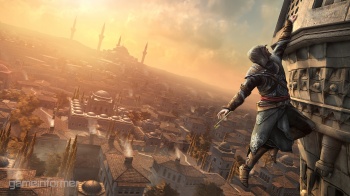 Work done for the PS3 and Xbox 360 will apparently transfer to Nintendo's new platform rather easily.

There's a lot of speculation about the successor to the Wii, both in terms of technical specification and whether or not it will sell. It's got the thumbs up from Ubisoft CEO Yves Guillemot though, who says that it is a "fantastic platform," which he thinks will be "extremely" successful.

Speaking during a recent earnings call, Guillemot said that it wouldn't be too hard to make games for the machine, Ubisoft would be able to "leverage" a lot of the work it was doing on the PS3 and 360. "We will not have to redo completely the games that we create," he said. "We'll be able to use all the capacity the console is giving but also use all the work we do for the other platforms."

Multiple rumors have suggested that Project Café - as the console is thought to be referred to by Nintendo - will be more powerful than the Xbox 360 or PS3. Guillemot's comments seem to suggest that the difference in the consoles' capabilities won't be huge, although that is just speculation.

Nintendo having a console that can go toe-to-toe with its rivals will no doubt help attract third party developers, something that Nintendo has found difficult with the Wii. Unfortunately, if the difference really is relatively small, it might put Nintendo in a difficult position when Sony and Microsoft widen the gap with their new consoles.