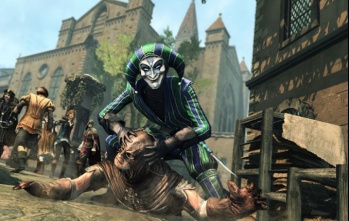 Ubisoft has been delivering a quality Assassin's Creed game on a yearly basis, and hopes to do the same with other franchises.

If the newly announced Assassin's Creed: Revelations makes it onto shelves by the end of 2011, it'd mark the third year in a row that Ubisoft has released a main entry in the series. Counting off-shoots, the publisher has been releasing Assassin's Creed titles on a yearly basis since the original Assassin's Creed in 2007. According to Ubisoft CEO Yves Guillemot, the success of this model is driving the company to apply it to other franchises.

On Ubisoft's recent financial conference call (via Giant Bomb), Guillemot said: "What is impressive with the release year after year of Assassin's Creed is our ability to deliver every time with a high level of innovation and creativity in a large and very diverse open world. There is no other open world console game that is coming on a yearly basis. This is achieved through great execution by providing more resources and by putting in place a very compelling network of leads and associate studios."

"We are applying the very [same] product template to our other strong franchises to bring them back to Assassin's Creed blockbuster profitable status," he added. Guillemot previously stated that Ubisoft was working on becoming the world's #1 videogame publisher, which would require adding a few billion dollars to its yearly revenue, and this could be one method to help with that.

Forcing franchises out of the door on a yearly basis isn't typically a good thing, but with Assassin's Creed Ubisoft has proven that it can do so while leaving quality intact (assuming Revelations isn't a stinker). The publisher has many big-name series it could be referring to for this model, including Splinter Cell, Prince of Persia, Far Cry, Ghost Recon, and Driver. The key would be keeping these franchises in gamers' good graces rather than beating them into the ground.