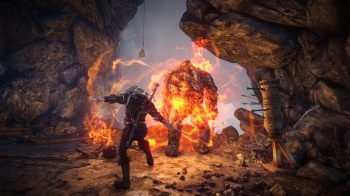 Every DLC pack CD Projekt releases for Witcher 2 will be 100% free.

Downloadable content has become a point of contention within the videogame industry today, with many feeling that developers and publishers charging for smaller additions to games that would have come for free in the past are nickel-and-diming loyal customers to death. These opponents of the DLC movement will have nothing bad to say about CD Projekt RED's action-RPG Witcher 2, however, as every DLC content release for the game will be made available for free.

The GameStop Facebook page recently held a public Q&A with the developers of Witcher 2 where fans asked how they'd be handling DLC. The reply was: "Let me announce that all our DLCs will be FREE. All of them. If anything will be for purchase, those will be expansion packs."

The responder added that the game's first DLC pack called Troll Trouble will release with Witcher 2 day and date. For free. It's a refreshing change from releases by larger publishers (*cough* Dragon Age) that have asked customers to pay for DLC the day they bring their shiny new game home. To clarify, retailer-exclusive DLC is still retailer-exclusive DLC and won't be made available to every customer at this time.

Witcher 2 will be released for the PC on May 17.

Thanks for the tip Lost in the Void!