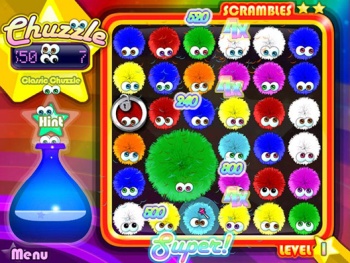 The PopCap classics Chuzzle and Plants vs. Zombies are coming to Amazon's Appstore for Android and if you're quick enough, you can get both of them free.

Notwithstanding its legal troubles with Apple, Amazon's Appstore for Android seems to be doing quite well for itself. The latest addition to its stable is a biggie: casual super-studio PopCap and its hits Chuzzle, admittedly a little past its prime, and Plants vs. Zombies, which aside from Bejeweled is the biggest thing PopCap has ever done.

Beginning tomorrow, May 17, Chuzzle will become the first-ever PopCap game released for Android mobile devices, available exclusively on Amazon's Appstore until May 30. Plants vs. Zombies will follow later this months with a similar two-week window of Appstore exclusivity. The games will normally sell for $2.99 each but both games will be available on launch day at no charge. That's right, if you get 'em on day one, you get 'em free.

That's a pretty solid deal. There's a lot of free crap available on Android but most of it is, well, crap. These games, on the other hand, are anything but. "PopCap is a brand synonymous with great mobile games," as Amazon's Aaron Rubenson put it, and giving its games away, even just for a 24 hour span, is a great way to draw attention to Amazon's upstart Appstore.

Hit up Amazon's Appstore for Android tomorrow for the Chuzzle freebie and keep your eyes peeled for news about the PvZ giveaway, which I suppose most people would see as the big one of the two. They're both great but personally, I'm keeping my fingers crossed for an Android edition of Dynomite. Kaboom! Yeah, I'd pay for that.