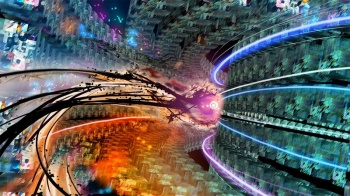 You know what's better than ripping off Tetsuya Mizuguchi's critically acclaimed Rez? Being paid to rip it off.

Flash game competition Experience the Music challenges game designers "to electrify the senses by creating a game that synchronizes music and unique gameplay." These words aptly describe the synsethsia-inspired design of Rez (originally released on Dreamcast in 2001) and the upcoming Child of Eden, the latest title by Mizuguchi. Both games take the rail shooter genre (a la Panzer Dragoon) and link the visuals and audio of the action to a soothing electronic soundtrack.

The competition, a partnership between flash game hosting site Kongregate and publisher Ubisoft, is built around promoting the motion-control-focused Child of Eden, which will be released June 14 for Xbox 360 and sometime in September for PlayStation 3.

Given Mizuguchi's eclectic catalog of games he has worked on and his prominent role as a judge in the competition, we here at The Escapist recommend any hopeful entrants combine elements of past Mizuguchi titles Sega Rally Championship, Space Channel 5, and - hey, why the heck not! - Rez.

Then again, we write about games, rather than make them, for a reason.

For more info on rules and entry details, visit the contest's official page.