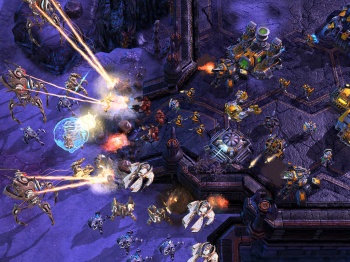 Two researchers believe that watching StarCraft matches is fun because the spectators can see stuff the players do not.

Competitive gaming and the people who like to watch such events has always been a kind of holy grail for the gaming community. The phenomenon of spectators watching experts play videogames the way that fans watch physical sports like baseball or soccer has been growing steadily over the last decade with organizations like Major League Gaming leading the way. Gifford Cheung and Jeff Huang from the University of Washington wrote a research paper that investigated why people like watching StarCraft and its sequel more than other games, citing the immense popularity in South Korea and the growing trend worldwide, if the large amount of YouTube commentaries on matches is any indication. In order for more games to enjoy the success that StarCraft has enjoyed as a spectator sport, Cheung and Huang think designers need to consider the "asymmetry of information," allowing people to become invested by deciding how they receive information.

"Video games are primarily designed for the players. However, the players are not the only people engaged with the game. In this paper, we turn our attention to the spectators, those who watch but do not directly interact with the game," the paper reads. "We want to know more about the context of their spectating so that game designers can better design video games as spectator activities."

To better understand why people enjoyed watching StarCraft, Cheung and Huang pored over thousands of emails, forum posts and comments to get to the nugget of what made spectating fun. The pair came up with nine distinct of spectator personas of StarCraft fans to use as tools in the discussion.

Which one of the following are you? (I'm pretty sure I'm an Inspired.)

The Bystander - The Bystander is the least engaged of the spectators. He or she is exemplified by an outsider's perspective.

The Curious - The Curious spectator focuses his or her attention on knowledgegaps about the game. As long as there is something that is incomprehensible and that can be discovered by spectating, the experience remains engrossing.

The Inspired - After spectating, the Inspired is eager to play the game himself/herself. Sometimes it is to try the same strategies that they witnessed; sometimes the enthusiasm is more broadly directed at the game itself.

The Pupil - Much like the Curious, the Pupil wants to understand the game and the techniques of the players. However, what distinguishes the Pupil is the emphasis on translating knowledge to practice. The Pupil's question is not merely "How did he do that?" it is also, "How does this information change how I play?"

The Entertained - On the opposite end of the spectrum of Playing vs. Watching are those who find satisfaction in watching, which many prefer over playing. For these, watching affords the experience of playing without the stress.

The Assistant - Spectators often have the opportunity to impact the game in-progress. Two examples of this are to act as an advisor to the player and to help the player focus on the game. The advisor acts as a second pair of eyes, giving the player reminders about what to do and alerts about key events that may have gone unnoticed.

The Commentator - The Commentator or "shoutcaster" is both
spectator and a performer. He shapes the viewing experience of other spectators by providing a running commentary of the game.

The Crowd - There is a strong communal aspect to spectating and a pleasure in watching a game as a group that matches behavior for traditional sporting events.

Beyond these profiles, Cheung and Huang discuss how spectators enjoy watching games (and all sports really) because they are unsure of the outcome. "In American football, elaborate plays are developed by the coaches before the players jog on to the field, and the spectator watches them unfold." The same is true of watching an expert StarCraft player begin his assault.

Cheung and Huang consider how the asymmetry of information can be used to design games to be more fun to watch. "Perhaps the proper question for designers to ask is not 'how do we give more information to spectators?', but rather, as spectators participate in and co-construct their own experience as a body of viewers, 'where should we place control over the game information?'"

It's all very cool stuff, and I think it's great that students at a major institution consider games like StarCraft to be worthy of investigation. If you're interested, the whole paper is definitely worth a read.