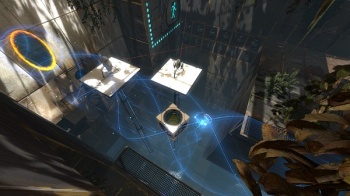 A North Carolina family is upset over jokes that they think "poke fun" at their adopted child.

Neal Stapel and his 10-year-old adopted daughter were happily solving puzzles and screwing with physics in Portal 2 when it happened. Out of the blue, the sentient computers in the game began belittling the protagonist for being fat, stupid, and adopted. Stapel told his local news channel, WBTV, that this was "literally the worst thing I could have probably heard."

Stapel said that while he and his wife had never hidden from his Chinese daughter Zoey the fact that she was adopted, it had never come up, and they were waiting for her to be ready to talk about it. Having the subject aired out in the open by a videogame was jarring, to say the least. "It throws the question, the most ultimate question that that child is ever gonna have for you and it just throws it right in your living room," he said. "It says it's rated 'E' for everybody and I'm thinking maybe it's rated 'E' for everybody except for orphans."

The actual joke that upset the family was a moment in the game when a character tells the protagonist, "Alright, fatty. Adopted fatty. Fatty, fatty no parents." Taken out of context, the joke could seem offensive to both the obese and the parentally-challenged, but against the backdrop of an insane and childish robot actively trying to make the main character feel bad, you would think that some of the sting would be taken out of the remark. Especially when the character who slung the insult says seconds later that there really isn't anything wrong with being adopted.

Stapel is aware that it isn't really going to rile up most people who play the game, saying "If you're not an adoptive parent it's probably not that big a deal to you." He also said that he and his daughter actually really liked the game and will continue playing it, making sure to avoid the part they take offense to.

WBTV claims to have attempted to contact Valve for a statement, but the company has not yet said anything on the matter.