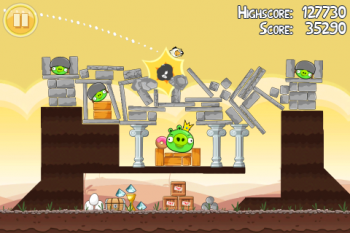 Apple's iOS may have an App for everything, but its users just want to play games.

Of the aforementioned 5 million daily game downloads, 90 percent are pulled down by iPhone and iPod Touch users. The more recently released iPad accounts for 9 percent of that figure, while Apple's line of Mac computers makes up the remaining 1 percent.

Those percentages seem to correlate directly to how recently each device made App downloads available to the public. The iPhone has offered App downloads since its 2007 launch, the iPad since its launch in April of last year, and Apple's computers since the launch of the Mac App Store in January.

As if to drive home the point that Apple's iOS gadgets are viable mobile gaming options, the survey even points out that the number of people playing games on the iPad alone (15 million Americans and 7 million Europeans) is greater than those gaming on Sony's PSP.

No conclusions are drawn by the survey itself -- that's not really how those things work -- but I think it's pretty obvious that Apple deserves praise for the massive success it's had in breaching the seemingly impenetrable handheld gaming space. It's got a ways to go before Nintendo starts fretting for the 3DS' market position, but considering the computer giant has managed all this in less than half a decade, it's quite impressive.