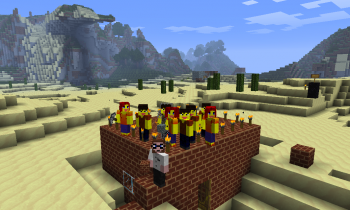 A New York City school is exposing America's children to the wonders of Minecraft at an early age.

If you're like me, computer class in grade school consisted of Oregon Trail, Carmen Sandiego, Number Munchers, and maybe a little of the Logo programming language. Oh, how things have changed. Today, in at least one New York School, kids in computer class get to play Minecraft.

At the Columbia Grammar and Preparatory School, first and second grade computer teacher Joel Levin developed an experimental Minecraft teaching unit that was designed to let kids explore, build, and collaborate within the game. He wasn't sure how it'd go over. Much to his surprise, the students took to Minecraft like they do to sniffing scented markers.

Levin allows his students to play in a modified Minecraft world that doesn't include monsters. His classes aren't so much focused on teaching kids to play Minecraft as they are on using Minecraft as a canvas for them to be creative with. In one situation, Levin had to take animals out of the game because students were just killing them all over the place, which wasn't in the spirit of his lessons.

Levin's blog, appropriately called Minecraft Teacher, explains the experiment from its beginnings. However, the best way to see how awesome it'd be to take a Minecraft class is to just watch one of Levin's lessons that he filmed and put on YouTube. One is embedded below and features the kids building after 12 minutes in. For school credit! These kids have it good.

Thanks for the tip GraelHart!