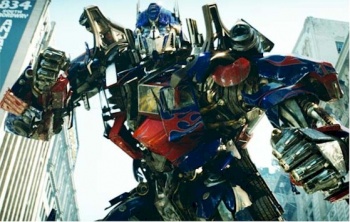 You'd think that getting giant robots to smash stuff would be easy, but you'd be wrong.

Whether you liked the Transformers movies or not, it's hard to deny that the visual effects that brought giant robots capable of changing for in the blink of an eye to life were pretty darn impressive. Some effects were trickier than others of course, but as Industrial Light & Magic supervisor Scott Farrar shows, with a little ingenuity and a lot of planning, even the toughest shots can look great.

The behind the scenes footage - which you can watch here - deals with a section from the first Transformers movie, where Megatron, in his Cybertronian jet mode, smashes through a building with Optimus Prime clinging to his underside. Rather than try to do the whole scene digitally, something that director Michael Bay apparently wasn't keen on anyway, Farrar said that ILM used a combination of digital and physical effects to achieve the shot, building an enormous miniature - as bizarre as that sounds - and filming the carnage as a scale replica of Megatron ploughed through it.

It's fascinating to see the lengths that ILM went to for a sequence that lasts just a few seconds, but it's hard to deny how effective it looks. It's a little like learning how a magician pulled off some elaborate illusion: interesting and enthralling, but in a very different way than the trick itself. If you're interested in the visual effects that go into movies, you can see a load more on ILM's official YouTube page.