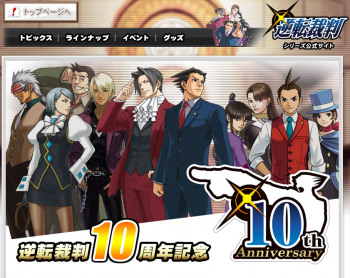 Japanese director Takashi Miike, infamous for occasionally brutal and disturbing films, is setting his sights on adapting a courtroom-themed Nintendo DS game for the big screen.

There's no denying that Japan's Takashi Miike is a talented filmmaker, but he's also an incredibly controversial one thanks to a fondness for gore and horror (his episode of Masters of Horror, "Imprint", was never aired on Showtime, for instance).

Speaking with HuffPo's Karin Badt at the Cannes Film Festival, however, Miike said that his next project would be very different from his latest work, the Cannes-nominated Hara-Kiri: Death of a Samurai. In contrast to his customarily violent work, Miike said that this next film would have very "little blood."

"It is a very light comedy that I am filming now, a court drama, based on a video game, the Nintendo game DS [sic]."

What game could that be? The most obvious - and most famous - answer would be Capcom's Gyakuten Saiban games, which saw release in the West as the Ace Attorney series. However, there is, in fact, another DS courtroom game - Namco's Yūzai x Muzai - it just isn't as well-known as Gyakuten Saiban.

As someone who absolutely loved the Phoenix Wright games, I'm positively giddy over the possibility of a film adaptation. If it turns out to be the other series, so be it, but the adventure-esque Ace Attorney games would make a perfect fit for a light-hearted court comedy (since, you know, that's what they are).

I just have two questions: If this is in fact a Gyakuten Saiban movie, will they keep the original music, and how the hell will they pull off Phoenix Wright's (er, Naruhodō Ryūichi's) hair?