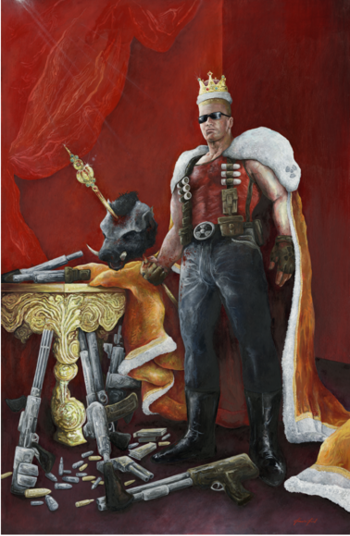 Ladies and gentlemen, the apocalypse is here after all.

It's the most famous piece of vaporware in gaming history. It was announced on April 28th, 1997, and people were already making jokes about it never coming out back in the early 2000s. During its development, gamers saw the creation of the entire Grand Theft Auto series, the entire Sims franchise, every Final Fantasy after the groundbreaking FF7, and every Pokemon game ever released outside of Japan - just to name a few. Its developer closed its doors in 2009.

Or, to use gaming parlance, it's gone gold. The discs are actually being pressed, boxes are being made, and distributors are ready to, well, distribute. It's kind of their thing.

"Duke Nukem Forever is the game that was once thought to be unshippable, and yet here we are, on the precipice of history," said 2K Games president Christoph Hartmann in a statement. While "precipice of history" does seem a bit overwrought for the occasion, this is a game that's been in development for almost a decade and a half at this point - so I think we can cut him some slack on the hyperbole.

The game is scheduled to hit shelves June 14th (or June 10th in other parts of the world). Part of me still thinks that's a lie, and that gamers everywhere will put the discs in their (insert platform of choice) only to find out that Gearbox really just relabeled a bunch of Borderlands discs and sent them out instead.

Quick, someone look out the window and check for flying bacon.