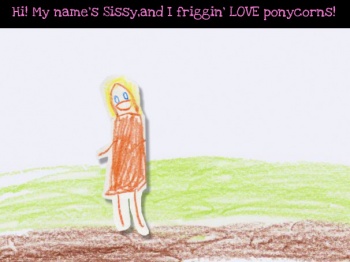 I hope you're sitting down, because you are about to see the most adorable game since Nintendo canceled Luigi's Kitten Basket.

Sissy's Magical Ponycorn Adventure is a Flash-based adventure game, that unlike the vast majority of similar titles was conceived and designed by a 5-year-old girl named Cassie. The creation of the game's more technical aspects were farmed out to 33-year-old Ryan of Flash developer Untold Entertainment Inc. using the company's Untold Graphical Adventure Game System.

As a result, the title's key concepts involve crayon illustrations, sparse animations, and 100 percent of your daily recommended allotment of pure, military-grade cute.

The existence of this game however, raises two important questions.

First, what exactly is a "ponycorn?" If Cassie's fully-voiced narration is to be believed (and it almost definitely is), a ponycorn is "the best thing in the world 'cuz they're like ponies and unicorns." It should also be noted that Cassie "friggin' LOVES ponycorns."

That query answered, we can address our second question: How is it that a 5-year-old is able to design an adventure game? Assistance from her 33-year-old aide aside, I think it's apparent that this game was created entirely by virtue of Cassie's overwhelming cuteness.

If, at some point, you can stop squealing with delight long enough to operate a web browser, Sissy's Magical Ponycorn Adventure can be found on the Untold Entertainment website. The game controls similarly to a classic Sierra PC adventure, except that all the instances of unavoidable death and game-breaking bugs have been replaced with extra helpings of childhood whimsy and intense cutesypoo.

Where the Funny Things Are Veng Xiong 28 Comments
Comments on