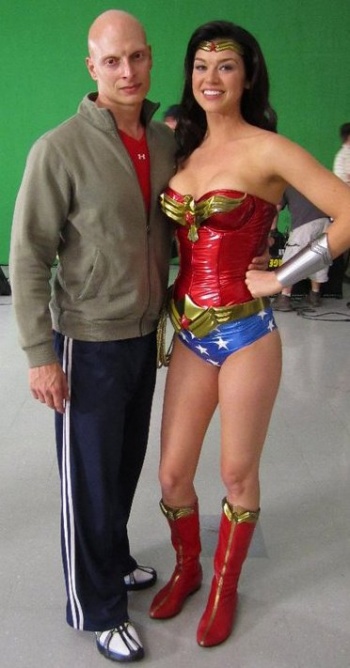 Not many people are all that upset with NBC passing on that Wonder Woman TV show, including the CEO of Warner Bros.

When NBC decided to pass on David E. Kelley's Wonder Woman, nobody was really all that surprised. Between the first costume, the second costume, and a script that generally sounded fairly underwhelming, it honestly sounded like passing on the show was for the best. And you know what? An executive at Warner Bros. is pretty understanding about the whole thing.

Since Warner Bros. owns DC Comics, the studio would've produced the show. Warner Bros. CEO Peter Roth recently spoke to The Hollywood Reporter about the ill-fated show, which he believes was pretty full of promise. However, he thinks it makes sense that the channel passed on the pilot:

"[A]fter seeing the announcement of the NBC schedule, I now understand and agree with Bob [Greenblatt, NBC executive] that it doesn't necessarily fit particularly well with their schedule. As well-crafted and contemporized as it was, it was a big and radical shift for viewers to embrace this new idea - and that may, to some degree, have had to do with why it didn't make it."

Roth was asked a follow-up questiona bout whether or not the show might appear on a different channel, which he could neither confirm nor deny. So, you know, true believers in the Amazonian princess can hold onto the faint hope that the show might be aired somewhere else.

Now, on a totally separate note: Remember how it was promised that Wonder Woman would totally wear "those little shorts"? Well, as you've probably guessed, the included photo here fulfills that promise. The picture was posted by a fan who got to visit the set when the pilot was in production.

I can't help but wonder what would've happened if Kelley and his crew had released some promo photos of Adrianne Palicki in the classic outfit instead of the ones that were shown off to the public. I'm not exactly wild about it, but I have a sneaking suspicion that it wouldn't have been as widely-reviled as the retconned costume was.