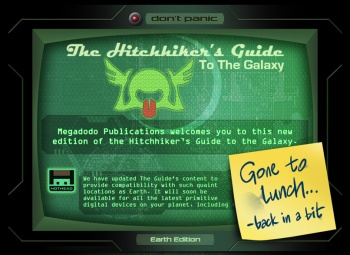 Grab your towels, kids, because Hothead Games is about to take us on a whole new hitchhiking trip across the galaxy!

The Hitchhiker's Guide to the Galaxy is one of the most famous and most beloved adventure games in the history of, well, the galaxy, but it's been 27 years since Infocom brought Douglas Adams' most famous work to computer screens. An entire generation has been born and raised without knowing the pleasure of trying to get that damned babelfish, in other worlds, and boy, that's just not right.

Don't panic! Hothead Games, the studio that brought you Penny Arcade Adventures, Swarm and Deathspank, is working with Megadodo Publications to bring a new edition of the famous Hitchhiker's Guide to the Galaxy to all the planets in the uncharted backwaters of the unfashionable end of the Western Spiral arm of the galaxy, including ours. "We're super excited to be involved with such a legendary creation as The Hitchhiker's Guide to the Galaxy," said Hothead's Joel DeYoung. "All the hoopiest froods here at Hothead jumped on the chance to work on the project."

Deets are pretty thin at this point but an early look at an entirely non-functional preview edition of the Guide can be had at thenewhitchhikersguide.com, where you can also sign up for the mailing list or throw it some love on Facebook. Alternatively, you can just get stupidly excited right here, because holy crap! New Hitchhiker's Guide! Microscopic space fleet! Peril-sensitive sunglasses! Foonting turlingdromes! Suddenly the universe seems to be a bit of a happier place.