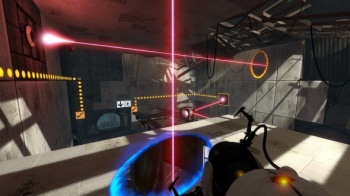 The best Portal 2 puzzle designers have a chance to win some sweet prizes from Valve.

If puzzle-based cruelty runs through your veins, now would be a good time to start learning the Portal 2 design toolset. Valve has teamed up with the ThinkingWithPortals map-making community to put together a Portal 2 level design contest that'll award 2 participants with prizes and prominence.

ThinkingWithPortals isn't associated with Valve, but Valve announced the contest on its blog and is supporting it with official prizes. The first and second place winners will receive an "ultimate Portal 2 gift pack" signed by the developers of Portal 2, which hopefully contains more than the game considering that map-makers already own it. The winning maps will also be spotlighted by Valve on the official Portal 2 website and on ThinkingWithPortals.com.

Maps can be of the co-op or single-player variety, but cannot contain any custom assets. Designers must use only what Valve has provided in the toolset, and maps have to feature solutions possible without glitches or associated craziness. Entries will be judged on complexity, visual appeal, attention to detail, innovation, fun, playability, and number of offensive adoption jokes. Maybe not that last one. Official rules can be found here.

The contest only runs until June 6, 2011 at 11:59 PM EDT. From the time of this writing, that's less than two weeks, so you'd better get to work at applying those devious GLaDOS impulses.