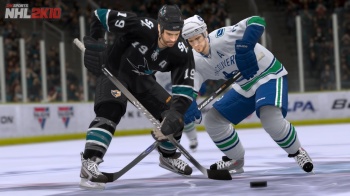 2K Sports has pulled the plug on NHL 2K12, a move which likely signals the end of the franchise.

It's easy to forget sometimes that EA Sports isn't the only sports game company in the business. 2K Sports, a division of Take-Two Interactive, has been kicking around for more than a decade with a number of officially-licensed franchises of its own. But it's been in a steady decline in recent years, shedding numerous games along the way, a scrap-heap that now includes the planned NHL 2K12 and, mostly likely, the entire NHL 2K franchise.

NHL 2K10 was the last full-on release in the series; for 2K11, it was decided to release the game only for the Nintendo Wii and iPhone. "We want to become a stronger competitor in this category and taking a year off on PS3 and Xbox 360, while focusing on making the best possible game for Wii, should allow us to accomplish that goal," Take-Two CEO Ben Feder explained at the time.

But 2K apparently had second thoughts about sinking more money into a head-to-head battle with the EA Sports behemoth. "2K Sports will not release an NHL title for consoles this year," the company told Kotaku. That does presumably leave the door open for an iOS version of the game, which makes some sense given that EA Sports does not produce a version of its NHL series for the iPhone [yet], but with only two licensed sports titles remaining to its name - NBA 2K and MLB 2K - and the expiring Major League Baseball contract unlikely to be renewed, it seems more likely that the NHL series, and perhaps, eventually, the entire 2K Sports brand, will simply be left to wither and die.