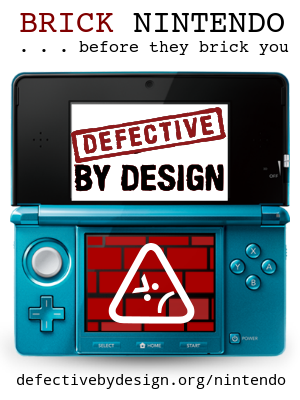 In response to the 3DS' Terms of Service, the Free Software Foundation sent Nintendo a box full of bricks this week.

Since Nintendo's user agreement allows the company to brick, or permanently disable, a user's 3DS, the foundation got the clever idea to "brick" Nintendo. Well, sort of. On May 9, the group posted a call to action, on its site, to send a letter and 200 cardboard bricks to Nintendo of America President Reggie Fils-Aime.

"The Nintendo 3DS is Defective by Design and your Terms of Service are dubious, devious, and defective for the following reasons," the letter's opening reads.

The "Defective by Design" campaign is a response to the handheld's user agreement, which includes clauses that the group feels are unfair to the consumer. Along with Nintendo owning rights to video or pictures captured with the device, tracking user activity, and forcing non-optional updates, Nintendo has the right to "render the system permanently unplayable" if an unauthorized device or mod is applied to the system.

The end of the letter details the requests being made by the group: "Change your terms of service. Tracking a user's activity; claiming a copyright license on a user's data and their creative works; and bricking a user's device if she chooses to modify or use it an in "unapproved" way are intrusive and completely unacceptable, to say the least."

Nintendo responded to the group in an interview with MCV UK. The Nintendo spokesperson pointed out that the European 3DS doesn't have the same terms and is "in compliance with European requirements."

A recent Defective by Design blog post responded: "Wow. Nintendo is admitting that the Terms they are attempting to enforce elsewhere are so awful, they are illegal in the European Union!"