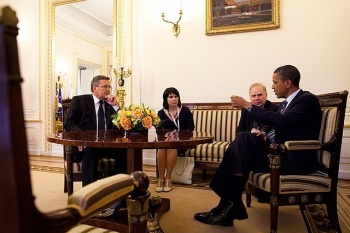 When one head of state comes to see another on an official visit, it's customary in many circles to present the foreign dignitary with a gift. These gifts can range from light-hearted and silly to extravagant depending on the relationship between the countries - and apparently, sometimes they can include a computer game.

US President Barack Obama recently visited Poland, and the Polish Prime Minister Donald Tusk was ready with a selection of high-tech gifts for the visiting leader. According to Gazeta.pl, he presented Obama with an iPad that had some notable Polish films installed, including 2002's acclaimed Katedra (The Cathedral). Tusk also gave Obama several English-language translations of novels signed by author Andrzej Sapkowski.

Oh, and he also gave him a copy of CD Projekt's The Witcher 2.

Granted, President Obama is a busy man, what with running the United States and all, so he probably won't have much time to sit down and really sink his teeth into Geralt's adventures anytime soon, if ever. Still, it's cool that we live in a world where two of the most powerful individuals in the world can give each other gadgetry and videogames as gifts.

Obama wrote a note in the Polish PM's guest book, "May the friendship between our nations grow in strength." He then paused and added, "and may Donald Tusk finally get his Paladin to level 85. The guild needs a good healer, dude! [British PM David] Cameron isn't going to heal through Magmaw by himself."

I may have made that last part up, but wouldn't it be cool?

(Incidentally, this is going off Google Translate, so if any of our Polish readers spot any errors in this article, don't hesitate to let us know. Thanks!)