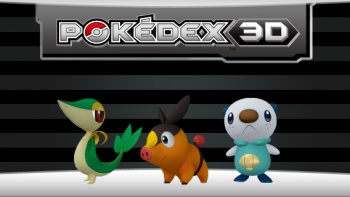 The 3DS eShop will launch with a game that'll turn the handheld into a Pokédex.

Every Pokémon player that gets into the series has dreamed about owning a real world version of the Pokédex at some point. With the 3DS's upcoming eShop update, supporters of Nintendo's newest handheld will come pretty close.

Nintendo has announced that the June 6 launch of the eShop will come with a free download called Pokédex 3D that gives users the ability to collect data on Pokémon from Pokémon Black & White. These Pokémon can be viewed in 3D with animated motion and sound, and trainers can see their stats and sort the little beasts by various criteria. If you don't have a particular Pokémon, you can trade with friends or use SpotPass to fill out your Pokédex. For now, it looks like Pokédex 3D will only work with Black & White.

The eShop launch isn't all about Pokémon, however. In North America, Nintendo is offering a remastered 3D version of the NES's Excitebike for free until July 7. The 3DS Virtual Console will launch with Game Boy titles Super Mario Land, Alleyway, and Radar Mission. DSiWare games will also be available in the eShop and Nintendo says users can "easily" transfer content from their DSi systems to the 3DS.

New content will be added to the eShop on Thursdays. In the future, Nintendo promises original 3DS software, more remastered "3D Classics" such as Excitebike, and additional Game Boy and Game Boy Color Virtual Console games. Japan is getting Game Boy versions of Kirby and Mega Man for its eShop launch, just to give you an idea of what we may be in store for eventually.