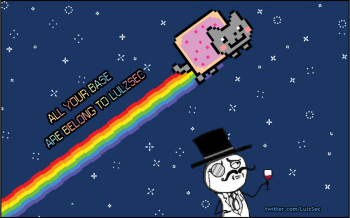 Nostalgia may have saved Nintendo from a more serious intrusion.

Sony isn't the only console manufacturer that's getting attention from hackers; Nintendo has admitted that it was also the target of an attack. However, while Sony lost all kinds of personal details as a result of the attacks against it, Nintendo says that hackers didn't get to any customer information.

Nintendo spokesperson Ken Toyoda announced the attack over the weekend, but said that there had been no "third-party victims." The attack was seemingly the work of hacker group "LulzSec," which recently attacked the Sony and PBS websites. According to the group's Twitter feed, it only grabbed a server config file as a warm up for other "operations." The group stressed that it wasn't targeting Nintendo for more attacks, saying that it loved the N64 too much and the intrusion was just a bit of fun. LulzSec said that it didn't mean any harm, and that Nintendo had already fixed the vulnerability.

It's hard to tell whether it was good security or just Lulzsec's nostalgia that protected Nintendo from a much more serious intrusion, but whatever the reason, it sounds like the company was quick to react to the attack. All the same, it's a little troubling that LulzSec was able to grab files from Nintendo's servers and write it off as effectively nothing more than a prank.

(Thanks to SaintWaldo for the tip.)