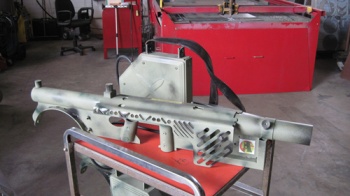 Constructed by Eddie Paul Industries, the faux laser cannon is a strikingly realistic replica of the weapon used by Akira protagonist Kaneda to forcibly vivisect the physically unstable Tetsuo during the climax of the classic anime.

"This life size Laser Rifle adapted from the AKIRA anime is a one of a kind collectible. The perfect addition to any die hard AKIRA fan's collection," the ad states before helpfully reminding any would be otaku terrorists that "this collectible is non-firing."

Though the $1,000 price tag seems a bit steep for a non-functional weapon that Escapist writer Andy Rose described as "... cool, but it looks like it could be made out of a nerf gun, gas can and PVC pipe," prospective buyers should know that the people behind this mantelpiece are well-versed in the creation of awesome toys for nostalgic, wealthy adults.

In April of this year, Eddie Paul Industries offered a replica of that awesome, red motorbike from the film for a cool $4,000. That recreation was so impressive that it was originally used in Kanye West's Akira-themed music video for "Stronger."

As far as anime replicas go, that bike would have been the preferable option, but if you're willing to drop $1,000, have access to a nearby stadium and an overweight friend you can shout "TETSUOOOOOOOOOOO" at for a few hours, this laser cannon could be a pretty cool investment too.

The craigslist ad was placed on June 1, meaning it will be expiring very, very soon. Presumably the gun has yet to sell, so if you're in the market, contact Eddie Paul as soon as possible.