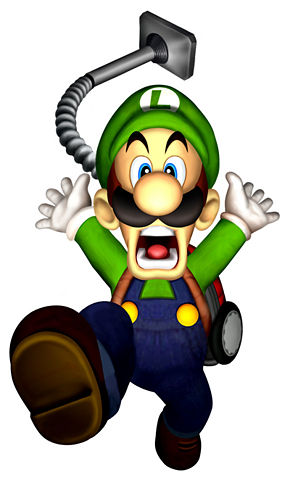 Luigi's Mansion for the GameCube was a very charming game even though it wasn't a blockbuster at retail. To pump up the 3DS's roster, Nintendo is making the game into a series with an official sequel on the handheld called Luigi's Mansion 2.

Nintendo offered its E3 press conference attendees hands-on time with the game. Unlike the first title that had Luigi roaming through a haunted mansion to save a kidnapped Mario, Luigi's Mansion 2 starts in what looks like an underground lab with Luigi and a cute little scientist in front of a group of monitors. On one of the monitors is a mansion. The professor tells Luigi about a particular ghost he must exterminate, and then teleports the Mario Bro. through the monitor to the mansion's location.

If you've played Luigi's Mansion, you know what to expect here. Luigi walks around with a vacuum, sucking up ghosts and valuables. The initial level seemed more detailed than those in the GameCube version. I walked Luigi around an outdoor courtyard, using Luigi's vacuum to pull a tarp off of a statue which had a propeller on the top. I put the vacuum in reverse mode to make the propeller spin, pulling the statue up and revealing a cache of treasure. All over the courtyard were secret little areas like this to either suck or blow on to collect dollar bills, coins, gold bars, and other forms of wealth. Luigi can aim the vacuum upward and downward to suck things up from all sorts of levels.

I didn't see a ghost until I got inside the mansion. I entered a room with an old-style car that seemed empty at first. I collected a key for a locked door in the other hallway, and tried to leave only to have an ethereal gate block my way. Inside of the car, a ghost appeared!

Ghosts must be stunned using Luigi's chargeable strobe flashlight, and they can then be sucked into the vacuum. Once you get a bead on a ghost with your suck power, it'll pull away and you have to chase it around the room, pressing A to make pulling the ghost in easier.

I popped a few ghosts into my vacuum bag and moved onto a long hallway with suits of armor that tried to drop swords down on my head, all the while trying to suck in everything and anything possible. So far, I'm liking Luigi in his new job as professional ghost hunter.

Nintendo hasn't put a date on Luigi's Mansion 2 yet.