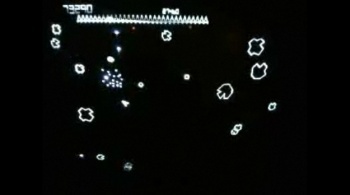 Word on the street is that Roland Emmerich, the disastermeister behind flicks like The Day After Tomorrow and 2012, has been offered the helm of the Asteroids movie.

First things first: yes, an Asteroids movie is in the works and yes, it is based upon the 70s arcade game in which a little arrow-shaped spaceship fires a stream of tiny dots to blow up endless waves of asteroids, all rendered in black-and-white vector graphics. How could that possibly be spun into a feature film, you ask? I don't know. But if somebody is actually determined to make this happen - and that does appear to be the case - then I can't think of too many guys better qualified to direct the project than Roland Emmerich.

Emmerich, for those who don't recognize the name, is the director behind the relentlessly noisy disaster flicks The Day After Tomorrow and 2012, as well as the widely-panned prehistoric fantasy film 10,000 BC. Amazingly, Emmerich's efforts over the past decade actually manage to make his earlier work, which includes such classics as Independence Day, Universal Soldier and the Michael Paré hit Moon 44, look pretty damn good.

It's only a rumor at this point but according to Vulture, Universal Pictures has offered Emmerich a script written by Matt Lopez, best known for his work on the recent Race to Witch Moutain and Sorcerer's Apprentice remakes. The story will apparently be set after the destruction of the Earth, which has forced the remnants of humanity to take up residence in colonies located in an asteroid belt. The survivors share the belt with an alien race that they believe saved them from certain, final destruction, but it turns out the aliens were responsible for blowing up the Earth in the first place and are now plotting to finish them off.

Oops. Spoilers. Sorry about that.