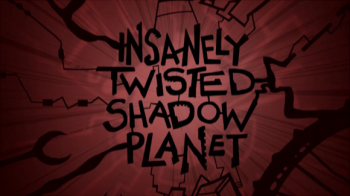 Are you ready for another Summer of Arcade?

For the last three years, Microsoft's Summer of Arcade promotion on the Xbox 360 has been a great way to draw attention to some of the best that the Xbox Live Arcade has had to offer. Titles like Braid, Castle Crashers, Trials HD, and Limbo (just to name a few) have received as much attention as most full-priced retail games, and with another Summer of Arcade on the way, the new school of summertime XBLA games is hoping to make an equally lasting impression. Insanely Twisted Shadow Planet is one of the Summer of Arcade games that might be able to stand out, and only partially because of its tongue-twisting title.

When I first saw Shadow Planet at Microsoft's booth on the show floor, I took one glance at the shadowy background and said, "Oh, this game wants to be Limbo." When I actually got my hands on the controller and watched the animated opening cinematic full of bright colors and explosions, it became immediately clear that Shadow Planet was actually nothing like Limbo. Instead, it combines shooting, exploration, and using different and upgradeable tools to create an experience that doesn't quite fit neatly into any given genre.

Set on an alien planet, you control a tiny UFO with a few tools at its disposal. At first, you only have the scanner, which displays what you need to get past obstacles and defeat enemies, and the claw arm, with which you can pick up items or rib appendages from foes. These items are displayed in a tool wheel, and can also be assigned customizable hot keys, making it easier to whip out the scanner or any other tool you happen to use a lot.

There's a lot of exploration in Shadow Planet, and it feels not unlike the more recent Castlevania games, meaning there's some going back and forth as you acquire upgrades and better items that allow you to access new areas. After finding the laser, I was able to shoot projectiles, and there were a handful of other spots open on the tool wheel for items to come later in the game.

While Shadow Planet pretty effectively combines different elements to make a fun gameplay experience, it also stands out because of its distinct art style. I know I said it looked like Limbo at first, but other than the shadowy backdrop there's really no comparison. It's colorful, though the scenery is kind of-well, twisted and nightmarish are actually good adjectives in this case, making the title seem more and more perfect.

I can't say how Insanely Twisted Shadow Planet will compare to the other games in this year's Summer of Arcade promotion, but on its own it's a fun, quirky title that appears to be able to hold its own. I can't wait to see how complex the game actually gets with an entire arsenal of tools at my disposal when it becomes available later this summer.

Insanely Twisted Shadow Planet will be available this summer for the Xbox Live Arcade.