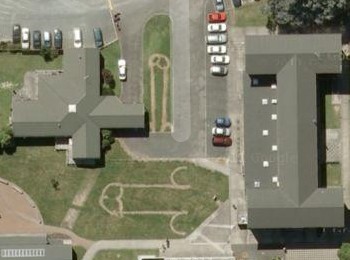 Students in New Zealand have brought their school internet immortality by burning drawings of giant penises in the grass which were then captured by Google Earth.

Do this, right now: go to Google Maps. Search for Fairfield College, New Zealand. Zoom in - use the slider, not your mouse wheel, to ensure you're looking at the right spot. [Or you could just hit this link.] What do you see? That's right! It's a pair of gigantic, 40-foot lawn dicks!

The huge wangs were actually created in May 2009 by students who used weed killer to burn the images into the grass, in a stunt reminiscent of a Simpsons episode I recall seeing some years back. Ha-ha, very amusing, detentions all around and that would have been the end of it [once the grass grew back] except that entirely by coincidence, the gigantic johnsons were photographed by satellite and incorporated into Google Earth, where they remain to this day.

Acting principal Gerhard van Dyk said the prank was perpetrated over a weekend so by the time the caretaker discovered the weed-killer wilsons it was too late to do anything about it. He used more of the stuff to try to camouflage the offending images and eventually all the grass was killed, but because of the delay it took months before the overgrown yard dongs disappeared completely.

The pranksters, who have since graduated from the school, were actually never caught but according to a follow-up in the Waikato Times, all the recent attention has led to some pointed fingers on Facebook. "I don't think he's enjoying the attention," a friend said. "I've seen him deleting a few comments from people who have realized it was him, trying to protect his name. As far as I know, they weren't aware it was on Google Maps until I sent one of them the link."

Most of the responses to the original story on Stuff.co.nz expressed amusement over the stunt, although one commenter, Dave Dickson, claimed to be dismayed by "the twisted minds of today's youth, brought up on a heavy diet of hardcore pornography." Netsafe Executive Director Martin Cocker also warned that quests for online infamy sometimes have a tendency to backfire because "things hang around a lot longer on the web."

And now for some fun at home! There are actually six lawn dicks at Fairfield College. Can you find them all?

How to Cheer Yourself Up Colin Rowsell 8 Comments
Comments on