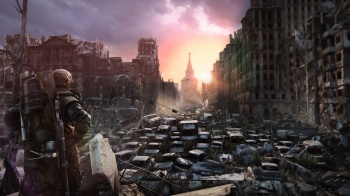 This isn't going to be a very popular opinion, but I am really tired of gray and brown shooters.

It's not that I dislike all shooters. In fact, there are several first- and third-person shooters that rank high among my favorite games of all time. But at E3 this year, these supposedly epic shooters with nothing but endless shades of gray or brown did absolutely nothing for me.

Well, I suppose Metro: Last Light is a little different. It's gray and brown.

Perhaps I'm being a little unfair, so let's go back to the beginning. Metro: Last Light is the follow-up to Metro 2033, which received mixed reviews but was praised for its story and environment. Last Light picks up a year later in post-apocalyptic Russia, where humanity appears to be non-existent, abandoned cars clog up roads long since traveled, and the only sign of life above ground are the demonic creatures flying around.

The world above is very gray, very depressing, very lifeless. It's nothing but the ruins of the society we once knew. Underground, though, in the metro, things are different. There are still some people down there, still some signs of life. Also, it's brown, not gray.

To be clear, I'm not saying that Last Light is a bad-looking game. It's actually very, very pretty. I just thought that the opening seconds of the demo I saw yesterday didn't do a whole lot to distinguish the game from every other post-apocalyptic shooter in existence.

During the demo, Metro: Last Light was promised to be immersive, intense, and sometimes terrifying, with elements of survival horror and exploration mixed in with the first-person shooting. With an environment as claustrophobic as a bunch of dark subway tunnels, I think developer 4A Games will be able to heighten the suspense beyond what you would expect in a typical FPS. In fact, the protagonist was shown shooting out the lights to use the cover of darkness, which kept soldiers in the metro from being able to see him, but made the area that much creepier. A few stealthy kills were pulled off by creeping around in the darkness before a firefight eventually ensued between Artyom and the enemy soldiers.

As the shootout continued back and forth on two moving trains, I was treated to just a glimpse at the variety of weapons Artyom has at his disposal in Last Light. Rifles, grenade launchers, and chain guns are just a few ways to take down enemies in the metro. After an explosive finish to the train shootout, the demo jumped ahead to give the audience a quick look at one of the new mutants that can be found underground. The horrifying creature was certainly not something I'd want to run into in a dark tunnel.

I like the idea of weapon variety and story-driven gameplay, and I think 4A Games will be able to pull off suspenseful gameplay and a survival-horror type atmosphere in the dark underground tunnels much of the game takes place in. I just don't know how different Metro: Last Light will be when compared to every other shooter in the world that uses the same dreary color palette.