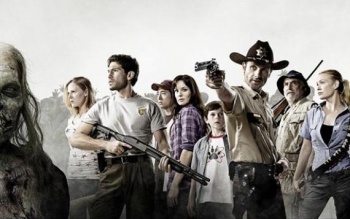 Telltale sheds some light on its darkest game yet.

While Telltale wasn't showing off any actual gameplay from The Walking Dead at E3, they did spill some details about what gamers can expect from the zombie apocalypse title. As an avid fan of Robert Kirkman's long-running comic series, I've been anxiously awaiting new details about this game since it was announced. Finally, I feel like I have a better idea of what to expect, and I'm really happy about it.

While many gamers may be familiar with AMC's Walking Dead TV show, the game is treating the comic like the Bible, and everything in the game will happen within Kirkman's canon. However, it won't follow Rick Grimes and his ragtag group of survivors, which I think is a good thing. It would have been far too difficult to appease comic fans while trying to cover the gruesome events of the book perfectly; instead, Telltale's Walking Dead puts the player in the role of Lee Everett, who finds an abandoned 7-year-old girl named Clementine early in his travels. Like Rick, Lee has woken up to the zombie apocalypse after a crash, and doesn't even have time to process what's going on before he has to start fighting to survive. Instead of trying to get into Atlanta, like Rick originally was, Lee is trying to get the hell out.

Just because Rick isn't the star of the game doesn't mean that players won't be treated to any familiar faces. The developers have promised a few cameos, but only in situations where it would actually make sense. For example, as Lee is making his way out of Atlanta, he'll run into Glenn running in for supplies. It's the same world, just seen from a different perspective, which I personally think is the best way to approach this game.

I was told that The Walking Dead is probably the darkest game that Telltale has ever done, which was a little jarring after just having seen a demo of their upcoming Jurassic Park, in which two characters get mauled to death by dinosaurs. It makes sense, though; The Walking Dead is often disturbing, heart-wrenching, gory, and has actually given me nightmares in the past after a marathon trade-reading session. I'm glad the developer isn't going to shy away from the tone of the story, which has no happy endings and no black-and-white decision. Everything is shades of gray, and I'm curious to see how the choices the players can make will affect the gameplay.

When you hear that even Robert Kirkman himself is happy with Telltale's video game approach to The Walking Dead, it's hard not to get excited for what's coming next. In addition to the episodic series, Telltale is also launching a Walking Dead Facebook game later this year that will tie into the main game in some way. I wish I had gotten to see the game in action, but after being tentatively excited about Walking Dead when it was announced, I'm even more convinced now that this series is in the right hands.