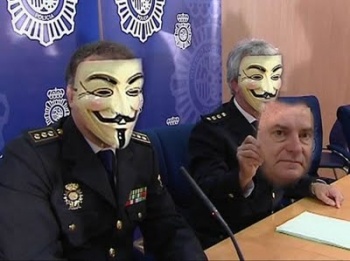 Hacker collective Anonymous is nothing if not vengeful, a lesson the Spanish National Police learned Sunday evening.

For those who have somehow managed to ignore Anonymous' widespread "hactivist" hijinks of late, I offer a recap of the facts so far.

From April 21 to May 14 of this year the PlayStation Network was offline following what Sony dubbed an "external intrusion." Anonymous was allegedly responsible.

National Police officials refuse to confirm what caused the website outage, but AnonOps Communications (a blog linked to Anonymous) claims the group is responsible.

"The attack is a direct response to the Friday arrests of three individuals alleged to be associated with acts of cyber civil disobedience attributed to Anonymous," the blog states.

Immediately following the arrests in Spain, Anonymous issued a press release that, in hindsight, seems to be warning of this attack on the National Police website.

"You have not detained three participants of Anonymous. We have no members and we are not a group of any kind. You have, however, detained three civilians expressing themselves," the press release reads.

"You are providing us with the fuel, but now you must expect the fire."

The Spanish National Police website has since been restored, and unless my español is failing me, offers no mention of the outage.

(Edited to clarify link between Anonymous and PSN outage. We apologize for any confusion.)