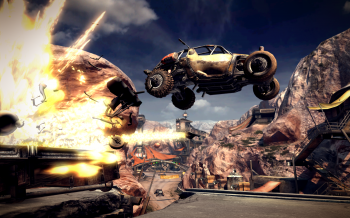 As most of Rage's sales will be on consoles, the game is being made for consoles first and foremost.

id Software co-owner and CEO Todd Hollenshead says that developing a game for the PC and then porting it over to consoles is the wrong way to make a multiplatform title. He says that id - which made its name as a PC developer - used to start with the PC version, but had since learned that starting with the consoles was actually a much better idea.

For id's upcoming game Rage, Hollenshead said that the focus was on getting the controls right with a controller. Once it had cracked that, he explained, id had moved on to the keyboard and mouse controls. The reason behind this is pretty simple: Hollenshead expects the majority of Rage sales - anywhere from two thirds to three quarters - to be on consoles, so the PS3 and Xbox 360 had taken priority. "We had the discussions early on with Rage about what platforms we were going to go on," he said. "Two-thirds of our sales are going to be on console, we're going to make sure we have that gameplay feel tight first."

"In game development, you have to tailor your gameplay to where you expect people to play it on," he added. "So, while we're developing Rage on the PC, we forbid anybody from playing it on a keyboard and mouse until we've played it first on a console controller. We pull the keyboard and mouse out and put in a USB 360 controller, even on the development staff. That's not just the testers."

This isn't the first time that id has made it clear what the priorities were for Rage: Nearly two years ago id's John Carmack said that the game was meant for consoles, and a year before that he said that PCs were not id's main platform anymore. It's not hard to see why id's focus has shifted away from PCs and towards consoles - developers and publishers aren't charities, and there's a lot more console gamers buying games than PC gamers - but that doesn't mean it doesn't sting to hear it.