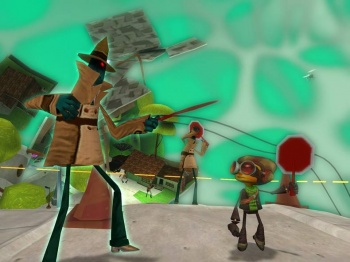 Soon, the only people making money on the cult classic will be the people who made it.

Double Fine's publishing deal with Majesco for the much loved Psychonauts will soon come to an end, meaning that the studio, which also created games like Brutal Legend and Costume Quest, will hold the sole publishing rights to the game, and thus all the revenue it generates.

Anna Kipnis, a senior programmer at Double Fine, revealed the news on her Twitter feed. She later expressed surprise at the response the tweet had received, and said that people shouldn't take it as an official announcement. Later still, she said that she had jumped the gun a little, and said that if people wanted to make sure that Double Fine got as much money as possible from Psychonauts purchases, they should wait until the developer made its official announcement.

Psychonauts was originally going to be published by Microsoft and be exclusive to the Xbox. However, Microsoft pulled out of the deal in March 2004, meaning that Double Fine had to find a new publisher. The developer signed with Majesco in August 2004, and released the game on PC, PS2 and Xbox just under than a year later. Unfortunately, the game did not sell very well, and was one of the reasons that Majesco stopped publishing big games.

Creator Tim Schafer has expressed a desire to revisit the world of Psychonauts, saying that the game's long tail on services like Steam and Xbox Live meant that it had much more brand recognition that its original retail sales suggested. However, the sequel would need a publisher, and while THQ might seem the likely choice - Stacking and Costume Quest are published by THQ - the publisher insists on owning the IPs of the games it publishes, which might make reaching a deal rather difficult. After the kerfuffle surrounding Brutal Legend, Activision would probably be out as well. Maybe EA - which published Brutal Legend after Activision dropped it - would want to work with the developer again?