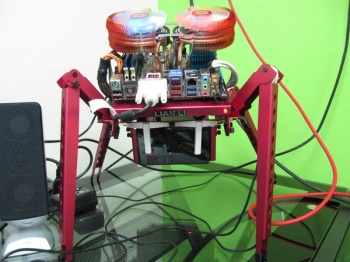 It makes Crysis 2 look amazing, but if you're not careful the Bandi Scarab might just enslave humanity.

Hyperbole aside, the Scarab is the work of Paul Bangdiwala, a man who fears neither machine, nor giant insect (or, apparently, any combination of those two nouns).

Under the hood, the Bandi Scarab boasts some very impressive computer hardware. From Mr. Bangdiwala's description of the beast:

The Bandi Scarab features a powerful AM3 motherboard from ASUS that supports a powerful dual-core AMD Phenom II of 3.0Ghz overclocked to 3.4Ghz (stable) with core-unlocking to 4 cores. Its got DDR3 4GBs memory, a 60Gbs SSD drive for a primary drive and a second 250Gbs drive for storage. The huge fan on top serves as the "eyes" which are a Thermal take duo-orb heat sink. The "teeth" are actually 2 wireless antennas that are specific to the motherboard. As you can see most of the cables are hidden which is to give a clean look. In a couple of days all cables (except the DVI) will be hidden. The PSU is a 550watt Fatal1ty OCZ model.

That's all well and good, but the bigger question lies in the motivation to create a computer that combines the most terrifying aspects of robot and beetle and replaces any weaknesses with exposed whirling fan blades. Mr. Bangdiwala offers no solid explanation, so I'm forced to assume the answer is either "inventive tech geeks don't need a reason to build awesome gadgets" or "intense desire to murder the world."

Whatever the reason for this machine's existence (and against the advice of the worried voices in my head urging me to shack up with Linda Hamilton and build pipe bombs by the dozen), I'm quite impressed by the Bandi Scarab.

It's easy to mod technology by aping popular designs, but creating a machine entirely in the image of a creature so innately antithetical to the natural mammalian form is a truly impressive feat.

Oh, and for those of you with deep pockets and a burning desire for a computer that may or may yes spend its idle hours plotting new and interesting ways to turn your skull into an oil can, Mr. Bangdiwala notes that the Bandi Scarab is up for sale. He offers no pricing details, but if you have to ask you probably can't afford it anyway.

For Science!: 7 Tesla Inventions That Others Took Credit for Rhykker 19 Comments
Comments on