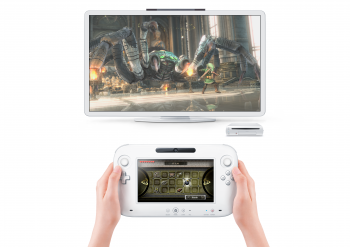 The Wii U could support more than one touch screen controller, says Nintendo, but it would make the console much more expensive.

Nintendo has revealed that its decision to support only Wii U controller per console is motivated by cost. Not just cost to Nintendo though, cost to Nintendo's customers as well. The Wii U can support up to five inputs in total, but the other four are limited to Wii remotes.

The Wii U controller has all the buttons and analog sticks you'd expect to find on a console controller, but it also sports accelerometers and a large touch screen in the middle of it, which can display data streamed from the console. Speaking to Japanese business site Diamond Online, Nintendo boss Satoru Iwata said, while the Wii U could technically support multiple controllers, it would raise costs quite considerably. Nintendo wasn't planning to ask its customers to buy more than one controller anyway, Iwata added.

Nintendo seems very keen to keep its profits as high as possible - or its losses as low as possible - on the Wii U. That isn't especially surprising; let's face it, not spending money you don't need to is good business sense, but this seems to be an odd corner to cut. It's like the PS3 only accepting a single Sixaxis controller, and forcing everyone else to play on PS2 pads. Obviously, the Wii U controller is a little more complicated - and thus expensive - than a PS3 controller, but it still seems rather strange all the same.

Multiple controller support isn't the only thing that Nintendo has decided to leave out of the Wii U either. The console also won't be able to play DVDs or Blu-Ray movies, because Nintendo didn't want to pay the costs for using the payback technology. Nintendo's rationale was that people already have plenty of devices that play movies, so adding the feature to the Wii U was unnecessary. While that does make a certain amount of sense, it's odd to see Nintendo moving away from the concept of a console as more than just a game machine, while its rival are moving towards it.

Of course, this won't be the first time that Nintendo has made gajillions of dollars doing things that its rivals aren't - or vice versa - so perhaps it will all pay off.