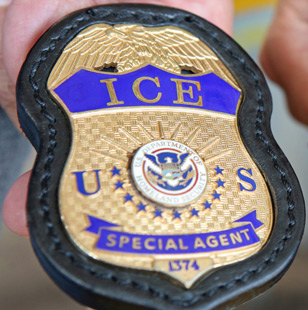 Officials from US Immigration and Customs Enforcement have petitioned the UK to extradite a 23-year-old student for linking to illegal torrents.

Richard O'Dwyer, the 23-year-old in question, is a student at Sheffield Hallam University. He studies computer science. In his free time he built a website called TV Shack whose purpose was cataloging and linking to "thousands of movies and TV shows from around the web."

Did I mention that all of O'Dwyer's links were pointed at illegal streams and torrents? They were. Also, O'Dwyer was pulling down ad revenue from the site, because if you're going to break the law, you might as well make some scratch in the process, right?

As a result, US government officials have seized the site (replacing it with a very official warning against copyright violation) and want the UK to ship the kid across the Atlantic so he can stand trial for his crimes in The States. If UK officials comply with the request, O'Dwyer faces up to 5 years in prison here in the Land of the Free.

As geek.com points out, though O'Dwyer is being charged with copyright infringement, he didn't actually infringe on anything. "His crime is linking to such content and therefore advertising it exists, he did not illegally copy and distribute the content himself."

The most interesting piece of this entire case is what it says about how intent the US government is to punish copyright violators. Extradition is the sort of thing you normally hear in regards to terrorists, murderers on the run and international drug lords, not CompSci students earning (likely paltry) cash linking to a torrent of the latest episode of Game of Thrones.

A discussion of the ethical and legal issues in play here is beyond the scope of this article (read: feel free to side with or condemn O'Dwyer in the comments), but I will add that if the extradition request is approved, the ghost of Pablo Escobar is going to be laughing for millennia.