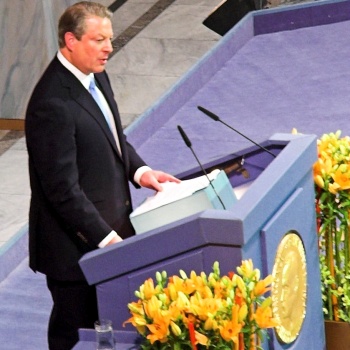 Videogames have an unrivalled ability to entertain, but they can also provide valuable tools in making the world a better place, according to former Vice President Al Gore.

In a recent speech at New York University, Gore, who served as VP under 42nd President Bill Clinton and won the Nobel Peace Prize in 2007, lauded the industry's growth, despite the ongoing worldwide economic strife. "This is a sector of the economy that justifies that optimism," he said.

"This is a very large, extremely significant industry with a wildly diverse and rapidly-growing audience of players on all kinds of platforms. We already know the immense power of popular media to illuminate issues that can seem intractable and overly-complex, but can be illuminated and presented to general audiences in a way that invites people to become involved in trying to solve the problems that our society has to solve."

Since his days as America's second-in-command, Gore has dedicated his time and significant resources toward raising awareness on a number of ecological issues. In addition to investing heavily in a number of green technologies, Gore has spent years educating people on the dangers of global warming via a surprisingly interesting slide show, which was immortalized in the Oscar-winning film An Inconvenient Truth.

Games, Gore believes, offer a new way to educate and inform the masses, as well as garner support and an interest in active involvement. "It has been very exciting to me to see so many ideas that integrate social good and efforts to make the world a better place into games," he said.

Specifically, Gore cites games that leverage the cooperation of groups and far-flung social communities, such as Zynga's wildly successful Farmville.

"These social communities say something positive about us and what gamification can do. This industry is sometimes defined by some of the lowest common denominator games ... but the cooperation over competition, and the social rules aspect is gaining momentum."

"I've been encouraged by recent developments like Trash Tycoon and Oceanopolis, and both have spurred my thinking in this area. In closing, I want to say that I'd love to work with any teams that are interested in making games that are focused on solutions to the climate crisis. I look forward to getting to know this community better," Gore concludes.

Regardless of your political affiliation, I think Gore's message is a valid one. Games, moreso than any other entertainment medium, have a capacity to enlighten and motivate people regardless of religion, culture or skin color.

If teenagers can instantly spot the minute differences between an M16 and an MP5 after a few hours with Call of Duty, they can certainly learn to conserve fossil fuels, given the right game.

Of course, that's the crux of the whole thing. It's up to developers to find a way for ecologically beneficial games to engage the average person. The audience is there, they just need the right game to motivate them.