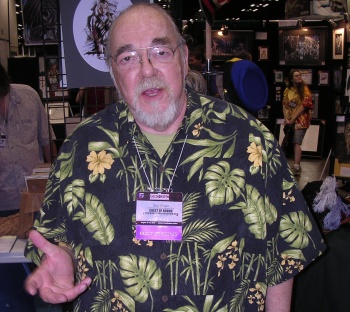 Town officials in Lake Geneva, Wisconsin have approved a plot of land for use in a memorial to deceased Dungeons & Dragons co-creator Gary Gygax.

Gygax, alongside Dave Arneson, designed the pen and paper roleplaying game in 1974 as an answer to the staid, military-focused strategy games of the time. The game was a huge success and in the decades since has served as a major influence on every aspect of pop culture, from movies to videogames to every fantasy novel that doesn't spring from the repressed fantasies of Mormon housewives.

Unfortunately, Gygax passed away in 2008 at the age of 69. If you were on the 'net that day, you likely recall the grim pall his passing cast across the entirety of geekdom. It was like the death of a Kennedy, only with a sharp increase in the number of pithy yet touching comments about rolling multi-sided die.

Since his passing, the Gygax Memorial Fund has been hard at work on plans to erect a memorial to the beloved geek demigod, and with the approval of that plot in Wisconsin, the proposal is one giant step closer toward immortalizing Gary Gygax.

The Gygax Memorial Fund has reached a huge milestone. We have been granted land for the memorial site at Donian Park. Donian Park is a four acre open space site which encompasses a wetland and the 100 year recurrence interval floodplain along the White River in downtown Lake Geneva.

It also details a relevant section of the minutes from a January City of Lake Geneva Board of Park Commissioners meeting:

Library Park was added to the application so that it reads both Donian Park and Library Park as a potential place for a monument. The design would include a castle turret with a bust on top and possibly have a dragon wrapped around the turret. A motion was made by the Mayor to approve the site in Donian Park, south of the walkway, on the southeast corner of Mill Creek. The footprint is not to exceed 10 feet by 10 feet. This was seconded by Phillips. Added to the motion was that Gygax should bring a detailed map to bring to the Council as well as a detailed statue design to come back to the Park Board for approval. Motion passed unanimously.

When I first started researching this news piece I was expecting the memorial to be a statue of Gygax, or maybe an obtuse sculpture of a d20 with a tasteful plaque. Then I read the minutes and find out the memorial is going to be a castle with a dragon wrapped around the base and a Gygax bust on the top.

For anyone else, that might be a tacky concept, but in Mr. Gygax's case, I think the memorial's inherent geekery is both an apropos tribute to the man, and a lovely way to continue his lifelong quest to inspire people toward the fantastic.